Glia Research and Development Innovation Pvt Ltd was established in 2003. Its founders are professionals who have gained significant organizational and corporate management experience in recent years. The goal of the company is the successful implementation of projects that are inter discipline sciences technologies and services that can be used by the general public. Glia Pvt Ltd has recently and still participates in several researches and developments and innovation projects. Most of them are multi-stakeholder, large-scale projects implemented in a consortium, in which we solve interdisciplinary tasks. Recent researches and product developments focus primarily on diversified researches in biotechnology, agriculture and agro-informatics. This is to increase the yield and sustainability of agricultural production, including technologies based on soil moisture measurement and various innovative algae-based organic soil improvers. The company has several algae-based products approved in Europe.

The company has recently successfully implemented a wastewater treatment development based on algae technology processes. In addition to its Budapest site, the company has a complex research base in Hungary that includes laboratories, a fermentation and photofermentation plant, and experimental gardening. The site is being expanded. The aim of the site development project is to implement a large-scale, integrated algae growing and processing plant that produces products suitable for biofertilization and fish feed in addition to plant biostimulants, biopesticides and feed supplements in a sustainable, environmentally friendly, economical and pollutant-free manner.

Construction of measuring networks. Full computer control can only be achieved with a properly designed selected sensor network. In accordance with previous practice, the system uses sensors used to measure the physical and chemical parameters of liquids used for industrial purposes. Of course, the performance of all components can also be monitored continuously, ensuring immediate detection of a fault.

Creating a digital model precedes the additive manufacturing process. This can be built using a computer aided designer (CAD) or 3D animation software. A digital model of an existing body can also be created using a 3D scanner. The software slices the different format models into thin, virtual virtual layers of the same thickness.

Production of R&D materials and equipment

Distributor of scientific bench-top equipment, consumables, custom services, laboratory materials, chemical and biological reagents for research and development projects. Our goal is to offer products that help laboratories and research institutes by making their operations and day-to-day work much easier, faster and more cost-effective. 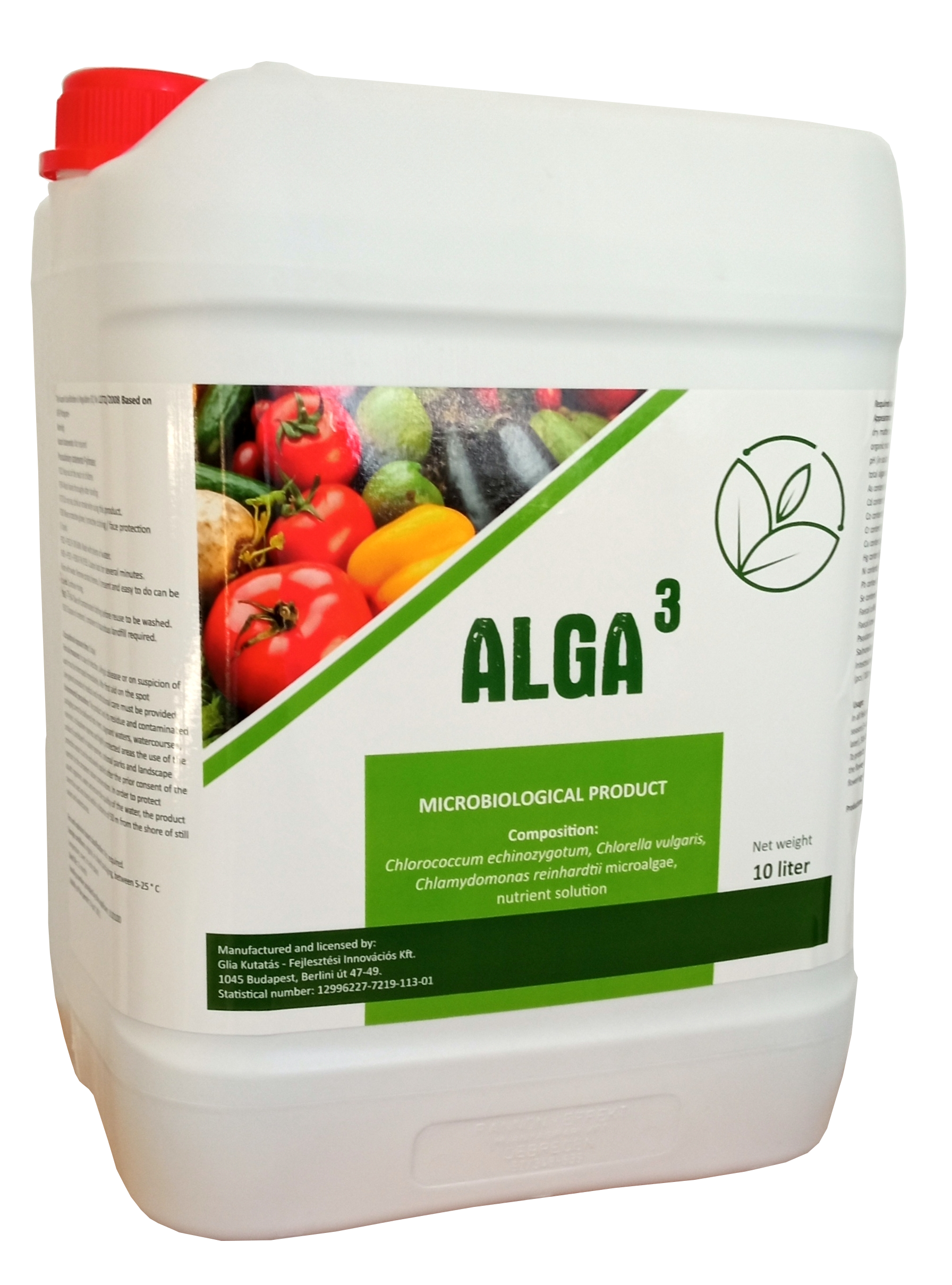 Algae3 is a microbiological product which is a specific mixture of cultures of three different algae species. It can be used in both arable land and hobby gardens as well.

In agriculture, the fertilising effect of algae cultures is already well known, due to their significant phytohormone content. The special feature of the product is that it is made up of three different species of algae, which were carefully selected during screening. The phytohormone composition of product-forming algae cultures is different, therefore, with their combined application, a significant plant fertilising effect can be achieved.

The effectiveness of the product is demonstrated by experiments in arable crops. Depending on the dose, Algae3 increased potato production by 14.2-18.6 % and significantly increased the proportion of large tubers by 25.7-31,2 % compared to untreated control. For maize, an excess yield of 11.3% was observed, while for sunflowers it was 5.4 %.

The product is produced by scale-up in aerated photobioreactors. During the manufacturing process, we first carry out the culturing of algae under laboratory conditions, during which we examine the physiological condition and purity of the cultures with a microscope. Once the cultures have reached the appropriate cell number, they are used as inoculants for larger- scale culturing. During larger-scale culturing, photobioreactors are aerated, for which the optimal light intensity for algae culturing is provided with natural and artificial light.

It can be used in all arable crops in quantities of 2-4 l/ha, twice during a growing season (3-4 weeks after sowing, after planting, then repeated another 5-6 weeks later),with a water volume of 200-300 l/ha applied by spraying.

Development of a solar cell waste processing and recycling plant at Glia Kft.

Glia Kft. Received a non-refundable grant of HUF 59.88 million from the Economic Development and Innovation Operational Program for the development of its solar waste processing and recycling plant in Tarnabod within the framework of the Széchenyi 2020 program. Within the framework of the project with a total cost of HUF 63.45 million, a MeWa QZ1200 cross-flow grinder was purchased, as well as the renovation of the water block, the renovation of the subgrade concrete and the production of non-stick resin cover in the hall where the plant is located. As a result of the development, a MeWa QZ1200 cross-flow grinder was purchased to process solar waste. The universal cross-flow shredder has revolutionized traditional shredding technology: it uses no cutting tool at all and uses the effects of impact forces to grind the input material particularly gently and quickly. By purchasing the machine, we can significantly increase the efficiency of waste processing both in time and in the amount processed. The base of the demolition plant was renovated and covered with a special non-stick resin, as its surface was negligible and difficult to clean, and the operation of the electric truck was almost impossible due to the unevenness of the substrate, which made material handling, time and energy from production tasks and was also accident-prone for workers.

In addition, the water blocks were renovated, obsolete water and sewer pipes, fittings and covers were replaced. During the investment, four toilets, four washbasins, two urinals and two showers were renovated. Renovation was absolutely necessary, as the water blocks were already in great need of renovation, the plumbing was outdated, mechanics had to be called very often to repair the failures caused by clogging and pipe ruptures, and hygiene was also justified. As a result of the development, the waste dismantling plant has become more efficient to work in more cultured conditions.

Development of a modular agricultural wastewater treatment system based on algal-bacterial co-cultivation technology.

The consortium formed by CYX Kft., Glia Research and Development Innovation Kft. Cooperation ”c. under the program. Within the framework of the project with a total cost of HUF 832.58 million, we will implement the development of a modular agricultural wastewater treatment system based on algae-bacteria co-cultivation technology.

The aim of the project is an agricultural wastewater treatment system, mainly slurry, composed of modular technological elements and integrated technologies, which enables the phase separation, treatment and re-use of water used in large-scale livestock technology after disinfection. The system includes the dewatering and composting of sewage sludge, allowing the production of value-added commercial goods from the compost. An novel electrocoagulation water treatment plant is used for the phase separation of the high suspended solids content characteristic of the composition of agricultural wastewater. We intend to solve the water purification phase with a system based on the algae-bacteria co-cultivation technology developed during the development, taking advantage of the fact that the microalgae have a good nitrogen and phosphorus removal capacity and are also suitable for the accumulation of various heavy metal contaminants. The heat generated in the aerated composting system that is part of the system is used to temper the water treatment system. The mass of algae produced during the process increases the content of the compost. In order to keep the water and compost in the system as short as possible, the temperature and pH control of the system, the aeration and the setting of the moisture content in the compost space are solved completely automatically. In the research and development part of the project, we carry out the necessary microbiological research and technical-IT developments.

A prototype of a modular concrete-plastic composite desiccant was completed at Glia Kft.

Prototyping, product, technology and service development c. Within the framework of its tender construction, Glia Kft. won a non-refundable grant of HUF 49.34 million for the development of a modular concrete-plastic composite screed prototype. The project was implemented at a net total cost of HUF 79.3 million at the Tarnabodi site of Glia Kft. During the project we implemented the following tasks: requirements analysis and final prototype specification, concrete and plastic material technology design, concrete mix design for the prototype (examination of aggregate grain distribution, mix design, test mixing with water / cement factor design and construction of a concrete template, design of production equipment and testing of the completed prototype. During the project, we acquired the intellectual product (know-how for the production of high-strength plastic fiber-reinforced concrete) and equipment (finished product handling scaffolding system, stainless steel custom-made concrete templates, high-frequency concrete vibrator and pedestrian forklift) and a market support website. As a result of the development, a prototype of a modular concrete plastic composite rainwater drainage system consisting of prefabricated elements has been created, which is suitable for the leakage or collection of sudden downflow rainwater and for the construction of other rainwater treatment systems. The most important novelty of the prototype is the system of interlocking concrete elements, which allows easy and quick installation. The other novelty is a load-bearing hollow body made of polypropylene with a 95% internal capacity, which can be inserted into a frame made of concrete elements. The latter significantly increases the amount of water retained. The geometry of the concrete elements simplifies the installation (the intermediate elements help to place the side elements vertically) and to fit the elements together. Concrete elements can be joined together with plastic connecting elements that do not rust.